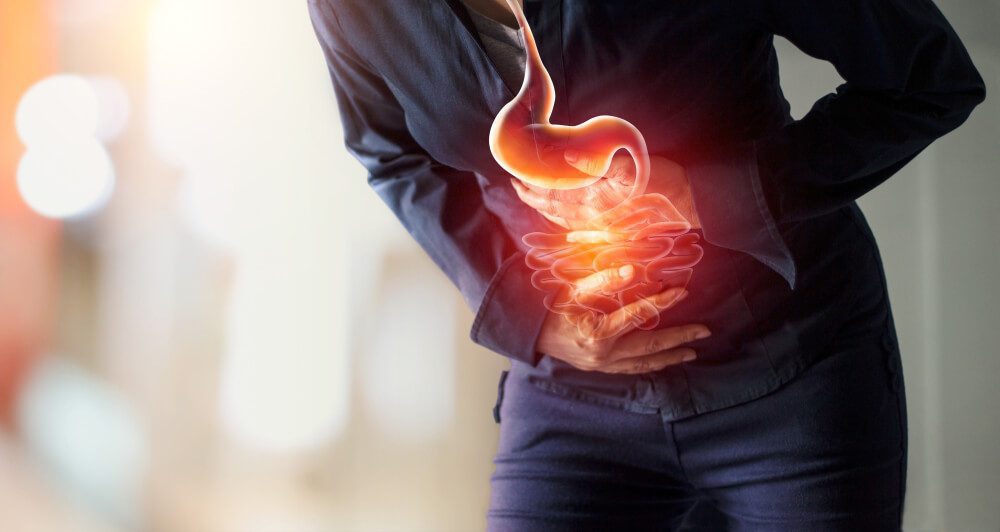 The environment of the stomach is highly toxic due to the presence of acid needed for digestion. The stomach has a protective lining called the mucosa to protect itself from the damaging effects of acid. When something destroys or reduces the effect of this protective lining, the mucosa becomes inflamed, causing gastritis. A type of bacteria called Helicobacter pylori is the most common bacterial cause of gastritis.

How and when do we suffer from Gastritis?

Any factor which has the potential to disturb and damage the protective mucosal lining of the stomach can cause gastritis.
With increasing age, our protective lining gets thinner and thinner and thereby loses its ability to protect the stomach. And thus such people are more prone to develop gastritis. The blood circulation to the stomach is a very important factor in the stomach’s ability to repair itself if its lining gets damaged. Smoking and old age reduce this blood supply and predispose to gastritis. Also, several drugs can cause direct injury to the mucosal lining resulting in gastritis. Such drugs include pain killers (NSAIDs) Steroids and some Anti-biotics.
Certain bacterial infections can also cause gastritis. The most prevalent bacteria causing gastritis is Helicobacter Pylori which affects about 70-80 percent of the Indian population.

What are the types of Gastritis

There are two main types of Gastritis:

1. Erosive: Erosive gastritis is caused by the destruction of the protective mucosal lining. . Causes include alcohol, smoking, NSAIDs, corticosteroids, viral or bacterial infections, and stress from illnesses or injuries.

2. Non-erosive: Non-Erosive gastritis is caused by only inflammation without destruction of the protective mucosal lining

Any factor which has the potential to disturb and damage the protective mucosal lining of the stomach can cause gastritis.
1. Chronic alcohol consumption in high amounts
2. Helicobacter pylori bacterial infection of the stomach.
3. Drugs like steroids or NSAIDs
4. Physical stress
5. Any critical illness requiring a prolonged hospital stay

What are the symptoms of Gastritis?

The symptoms of gastritis are varied and can range from no symptoms at all to the vomiting of the blood or perforation of the intestines. However, most commonly the patients present with symptoms of indigestion like bloating, burning in the chest and abdomen. The complete list includes:

DIAGNOSIS AND TESTS
How is Gastritis diagnosed?

Your healthcare provider will ask about your symptoms and history and perform a physical exam. Your provider may also order one or more of these tests:

1. Endoscopy to see stomach lining: It’s the easiest way to detect the presence of gastritis as it allows direct visualization of the stomach mucosa. Simultaneously a tissue sample may be taken for testing of H Pylori.
2. Breath test: May also be used to detect H Pylori, however, it’s not easily available
Stool test: This test checks for H. pylori bacteria in the stool.

MANAGEMENT AND TREATMENT?
How is gastritis treated?
Varies with the cause.:

What are the complications of Gastritis?

If left untreated gastritis might lead to serious complications.

1. Anemia – Intermittent loss of microscopic amounts of blood due to erosive gastritis can gradually cause significant blood loss over time and cause anemia
2. Upper Gastrointestinal bleed: The stomach may ulcerate and start bleeding either from the mouth or per rectally as black stools. It’s a medical emergency and requires urgent endoscopic evaluation and therapeutic measures as necessary.
3. Intestinal perforation: The stomach ulcer may become deep enough to result in perforation resulting in peritonitis. It’s a medical emergency and may require urgent surgery.
4. Stomach cancer: It may occur in chronic untreated cases.

How to prevent Gastritis?

H. pylori is one major treatable and preventable cause of gastritis. The bacteria is transmitted via the fecal-oral route. We can lower your risk of infection by practicing good hygiene, including hand-washing.

1. Avoiding fatty, fried, spicy, or acidic foods.
2. Cutting back on caffeine.
3. Eating smaller meals throughout the day.
4. Managing stress.
5. Not taking NSAIDs.
6. Reducing alcohol consumption.
7. Not lying down for 2 to 3 hours after a meal.

Gastritis is a very common problem and has multifactorial etiology. An Endoscopy is the best way to diagnose and confirm gastritis and also test for H Pylori. Most cases of gastritis improve quickly with treatment. For most people, medications relieve gastritis. Antacids reduce stomach acid, while antibiotics clear up bacterial infections.

Whom and when to consult?